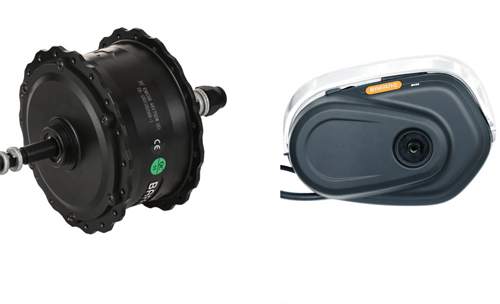 There’s a lot of misinformation out there about mid drive versus rear hub drive motors. So, let’s tackle that issue.

It’s not possible to buy a quality mid drive bike for under about $3300, unless you take your own good quality non-electric bike and add a motor kit to it. That can be suitable for some bikes, for others not. It is however possible to buy a quality rear hub drive bike for $2400 – $3000. Part of the reason for this is that hub motors have been around longer and have been produced in larger volumes, and so the manufacturing cost per unit is less. Another reason is that producing a frame to incorporate a mid drive motor is more expensive than producing a frame suitable for a rear hub motor.

In the past, many ebikes have had the battery located over the rear wheel, or behind the seatpost. So, if the motor was also in the rear, this made for a rear-heavy bike which is less than ideal, especially for trail riding. Today however, more and more ebikes are incorporating the battery into the frame – in the downtube which angles down over the front wheel. So, a bike with a rear hub motor and frame-integrated battery overcomes any issues of weight distribution.

One of the biggest advantages of hub motors is that they require little or no maintenance. They are an entirely independent drive system that retain all of their components inside the motor casing, leaving nothing for you to mess with or maintain. That enclosed system also means there is a lot less to fail.

The single largest advantage that mid-motors have over hub motors is their gear ratio. They allow the rider to power the rear wheel via the same chain and gear set as the pedals, which means that a low gear can be selected for powering up steep hills or accelerating from a stop with massive torque. A mid-drive motor in low gear can climb steeper hills than a hub motor of similar power, and can climb hills for longer than a hub motor. A mid-drive motor is also usually smaller and lighter than a hub motor of similar power.

In summary then, there are some performance and efficiency differences in certain situations and if you expect to find yourself in situations such as long, steep hill climbs, then a mid drive maybe the answer for you. For the city rider or the recreational trail rider (timber trails, rail trails, etc.) a hub motor will do just fine. Ken Agar, who has been selling & servicing ebikes for 10 years, says that when he has customers who ask “mid or hub?” the first question he asks is “will you be riding more urban or trail?” Then he tells the customer the benefits of both types and the price difference and then they mostly buy hub motors. “Unless you’re doing 70-80% of your riding on more challenging trails and mountain riding, it’s not worth paying the extra just for style,” says Ken. Of course, if you prefer a brand that offers only mid motors, or if you prefer the styling of a mid motor bike, then by all means go for it. Either way, you won’t regret owning an ebike 🙂