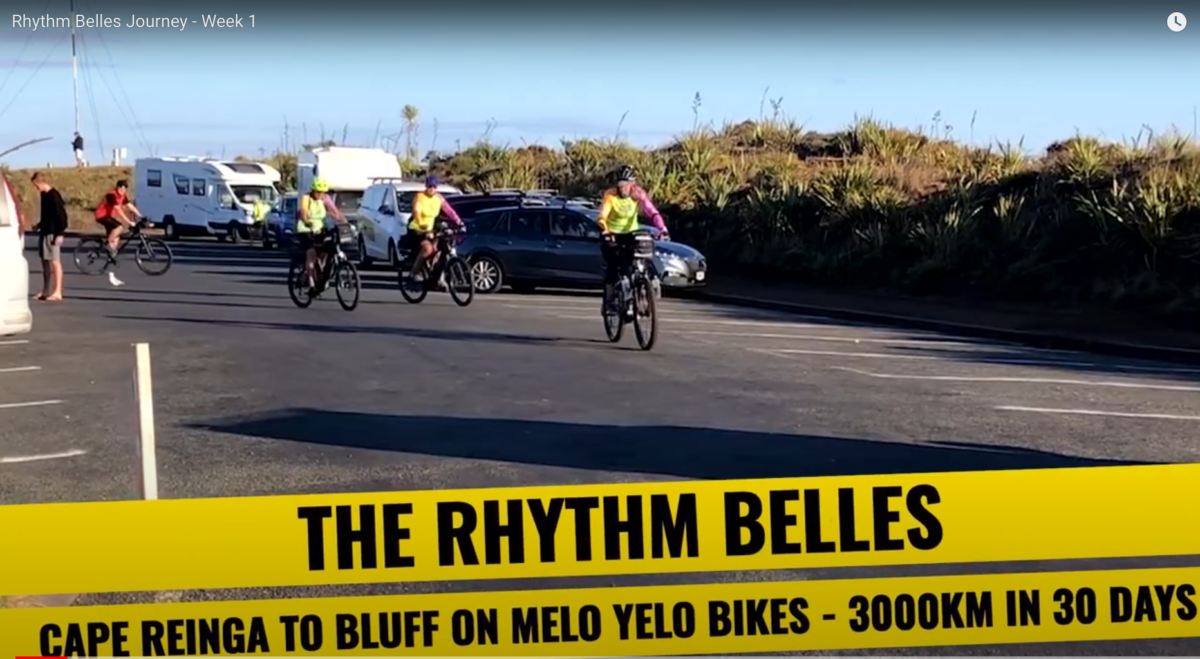 Tina Frantzen, Liz Forde and Martha DeLong, aka the Rhythm Belles, have set out on an epic journey, riding MeloYelo ebikes from North Cape to Bluff. One of their aims? To show older people that anything is possible, or as Freddie Mercury would say, “get on your bikes and ride.”

For 30 days straight, they’ll hop on their bikes at 6am and ride, on average, 100 kilometres a day. As of this writing, they have been riding for 9 days and have covered some arduous conditions from North Cape to Taumarunui. Watch the video highlights from their journey so far.

Along the way, MeloYelo agents are lending their support. Graham Tivers, MeloYelo agent in Northland, accompanied them in his van along 90-mile beach where they battled not only the difficulties of riding on sand, but also some strong head winds. The Belles refer to Graham as “their guardian angel” thanks to the generous support he offered them on this section.

Several of MeloYelo’s Auckland agents met the Belles at Mt Eden, making tweaks to their bikes to ensure trouble-free riding. Then in Matamata, MeloYelo’s Waikato agent Bruce McKenzie met up with them, again making any adjustments to the bikes that the Belles required. Tina says “MeloYelo agents have been fantastic. What I like about MeloYelo is that every agent is passionate about the bikes.”

From Matamata, their journey took them down to Whakamaru. Then, one helluva ride on steep, rutted tracks through to middle of the Pureora Timber Trail. Needless to say, their bodies and their bike suspensions got a gruelling workout. You can see a cool video of this section of the journey here.

And then, at the end of day 9, they rode into Taumarunui where the local police very kindly provided an escort into town. This came about because MeloYelo’s Taupo sales and service agent had sold bikes to members of the Taumarunui police. Sadly, Malcolm passed away recently of a heart attack, and this was a moment to reflect on Malcolm’s service, not only to MeloYelo but to the Rhythm Belles and to every customer who had ever purchased a bike from him.